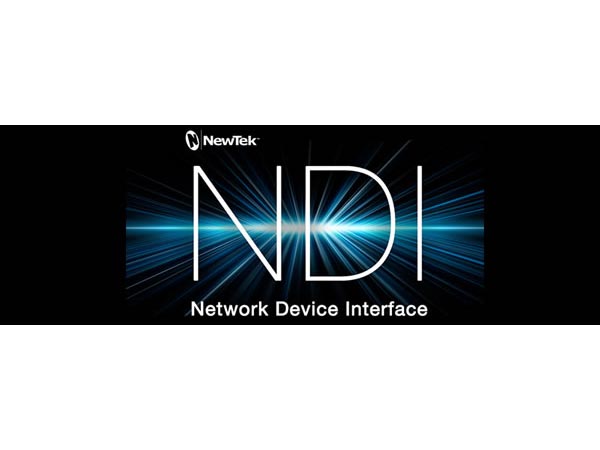 SAN ANTONIO, TX September 8, 2015—NewTek™ today announced Network Device Interface (NDI), anew open standard for live production IP workflows over Ethernet networks. NDI allows multiple video systems to identify and communicate with one another over IP, and to encode, transmit and receive many streams of high quality, low latency, frame-accurate video and audio in real-time. This new protocol can benefit any network-connected video device, including video mixers, graphics systems, capture cards, and many other production devices. NDI connectivity will be available in Q4 as a royalty free software developer kit (SDK) for anyone wanting to enable IP workflows in their facilities, or in production devices and systems they manufacture.

“The move to IP for professional video production will unquestionably be among the most revolutionary and transformative changes of the decade. We are very excited to be opening our network protocols so that the entire industry can benefit from them,” said Dr. Andrew Cross, NewTek’s president and CTO. “At launch, NDI will work with applications from almost every major vendor and virtually every I/O card on the market, meaning that it will be broadly available for real-world production use starting in Q4 this year.”

NDI’s superb performance over standard GigE networks makes it possible to transition facilities to an incredibly versatile IP video production pipeline without negating existing investments in SDI cameras and infrastructure, or costly new high-speed network infrastructures. Leveraging more than a decade of NewTek experience with IP in the context of computer-based live video production workflows, NDI support at launch extends to well over 100,000 compatible systems already deployed worldwide, making it by far the most prolific IP video transfer method in the production market.

"IP-based workflows are without a doubt the future of video production, and we are excited to work with NewTek on opening the standards to allow any company or customer to change their workflow,” said Petter Ole Jakobsen, chief technology officer of Vizrt.

"IP-based workflows represent a very important arm of the future of video production and the prospect of a unified IP video system as represented by NewTek’s open NDI protocol is very exciting," said Nick Rashby, president, AJA Video Systems. “We're pleased that NewTek will be supporting NDI on all our KONA, CORVID and Io product lines, opening up opportunities for their customers and ours to use existing infrastructure to rapidly engage in new workflow opportunities almost immediately.”

Typically, SDI systems and other IP workflows that utilize point-to-point network connections are heavily dependent on expensive high-speed infrastructures. In contrast, NDI is a bi-directional standard that can operate over a GigE local area network, with many video streams on a shared connection. Its encoding algorithm is resolution and frame-rate independent, supporting 4K (and beyond) along with 16 channels (and more) of floating-point audio. The protocol also includes tools that implement video access rights, grouping, bi-direction metadata and IP commands.

Sending, finding and receiving any number of streams are supported through the NewTek SDK, which will be available license-free allowing anyone to use it. NewTek is collaborating with current and new customers, manufacturers and developers on the NDI standard.