For the third edition of the Online Music Awards (OMA) this summer, MTV took TriCaster on the road through eight cities in the Southern U.S. in a tricked-out vintage tour bus. They set out to break the Guinness World Records® title for the Most Live Concerts in 24 Hours (multiple cities). TriCaster, the most complete, multi-camera video production and streaming system on the planet, was the centerpiece of the production bus, delivering live performances throughout the tour.

MTV’s Jeff Jacobs and Jason Pattan talk about how TriCaster is helping the network reach its audience on the second screen. 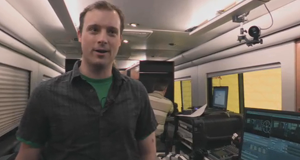 Live streaming after-shows, behind the scenes coverage and one-off opportunistic presentations over the Internet to fans of shows on its linear network is helping MTV connect with its core audience of teenage viewers and track changes in the way they consume media.

NewTek’s TriCaster is a key part of MTV’s streaming strategy. Not only does it deliver quality consistent with MTV’s on-air presentation, but it also does so for a price that is in line with the smaller budgets currently set aside for nonlinear program production.

From modest use of TriCaster only a few years ago, MTV has grown its nonlinear TriCaster show lineup to the point that in any given week more than a dozen regularly scheduled and one-off shows are being produced with TriCaster.

Charting the course for how to leverage TriCaster at the network is Jeff Jacobs, MTV senior vice president and executive in charge of production. In this interview, he and Jason Pattan, MTV director of Content Production and Technology Management, who is the first person to be trained on TriCaster and the network’s go-to guy for TriCaster productions, discuss how the production powerhouse is helping MTV achieve its goals for the second screen. 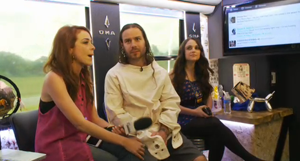 NewTek Magazine: How does second screen content play into MTV’s overall goals for building an audience?

Jeff Jacobs: In 2010, the day after the VMAs, The New York Times ran an article about MTV’s coverage of the VMAs, and the article said something like: “MTV last night dominated on two screens.” That’s the whole story.

You know, at MTV we are always looking to further enhance the viewers’ experience, on-line streaming and the .com on-demand video from the stream is a very effective way to get there. Also, we use the second screen to bridge seasons, which is an amazing tool to be able to use; and it is additional content for our pages.

Jason Pattan: The second screenis how our entire audience watches everything. It is how they consume all of their media. For an older audience, you do one thing at a time. You just watch TV. “I am sitting down on my couch, and I’m watching a television show. I don’t want to be disturbed; I’m just watching it.” That is why we have DVRs, and these people just watch one TV show.

It’s not like that anymore for our core audience. Our teenage audience grew up in a world where you watch TV, and you have a computer next to you. Now you have a smartphone, and you are using all of them simultaneously, but you are not ignoring one of them to use another. It’s all part of your viewing experience.
That actually is what’s great for us. When we do these live streamed events and use the TriCaster for it, it’s perfect for us because we are offering our audience an extension of our linear digital broadcast. It is something they are very open to using. It is actually how they prefer to engage our content because they feel like they are participating.

NM: How are viewers interacting with MTV via social media and helping to shape the direction of shows? 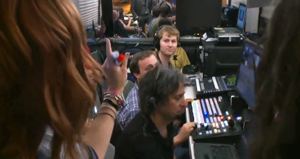 JP: We do a lot of Twitter integration, and we do a lot of our own chat windows that appear on screen next to a live stream player. What we will do -especially with the Twitter integration- is have a monitor on set or wherever we are shooting. We will push the Tweets to that screen, actually going through the TriCaster to get there. And we’ll have a host saying, “Look at this, we have tweets coming in. Let’s read some.”And we’ll be pushing that content up so the viewers, almost in real time, can see their own contributions, which is a whole new environment. It’s a great way to engage the audience.

NM: Do ROI (return on investment) considerations impact how you approach to these productions?

JJ: No media group has the same budgets for online production as they do for linear production; it’s simply a different business model. It doesn’t mean however one can’t create smart, effective and quality content for the second and third screens.

NM: What role does the TriCaster play in helping you achieve your desired ROI? 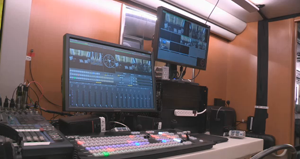 NM: Tell me about the projects you are using TriCaster to produce?

JJ: You know, at any given moment, at MTV, we could be using one of our many TriCasters for one of a dozen regularly scheduled TriCaster shows. In any given week, we could be producing with a NewTek TriCaster an MTV First to both linear and digital, our weekly RapFix live series, a biweekly episode of Live in NYC for The Studio at Webster Hall and a Jersey Shore or any other show’s after-show.

NM: How are you deploying the TriCaster for pre- and post-event coverage of the MTV Movie Awards and the MTV Video Music Awards?

JP: What we have been doing for the tent pole events (such as the MTV Movie Awards and MTV Video Music Awards) is really red carpet and behind-the-scenes coverage. It even starts before that as we will have a live stream up for days before an event streaming set erection and red carpet building.

And people watch it. We’ll get hundreds of thousands of people watching it -a static camera shot of some guys moving dollies and building a stage. It is amazing. And every year, the audience grows for that. We’ll make a big deal on the website and alert people that the red carpet cam is going up in four hours, get ready. So it actually begins days before a show begins. Clearly, America enjoys watching Teamsters unrolling red carpet on sidewalks. 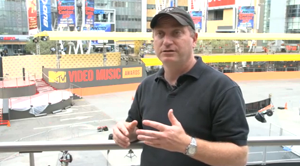 But for an actual show day, we’ll have red carpet interviews. That’s a big part. And that can be one person on a red carpet doing interviews, or it can be these online shows with 14 cameras that are all getting fed back in, and we are choosing among them. We have different fashion cameras, which are head to toe showing what celebrities are wearing, different robotic cameras up and down a red carpet, a few interview cams at different spots, and different correspondents on a carpet.

NM: When you look back from the beginning of your time in your position, how has the TriCaster evolved in the way it’s being deployed by MTV?

JP: When I first got here, there were zero employees who knew how to use the TriCaster. We were always hiring people, and everyone always looked at it as though, “Oh, I don’t have time to sit there and learn this thing.” At that time, we had a TriCaster 300 and an old BROADCAST. That was about it. No one really took time to learn how to use them.
So we said we’re going to invest in training our own people. And I was really the first one. I had never used it before I started this job. And within a couple of weeks I was doing after-shows and anything else that was needed. Then, I became sort of the TriCaster operator for hire. MTV would send me anywhere there was a big event happening.
That was a good place for us to begin because we needed people who could own it, learn it and be willing to train other people.

So I was looking around at other departments at people who were using the TriCaster in everyday production and finding people in those teams who really wanted to learn. We would do some little training sessions within our group, and we brought NewTek in a few times to demo different hardware and do daylong training exercises. And that’s really been good because now we don’t hire outside people. 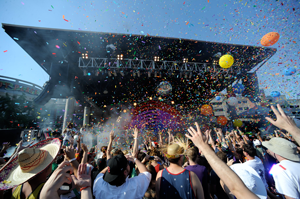 We might if there is one of the big tent poles because our regular staff people are off doing their jobs. But for our day-to-day stuff we went from hiring operators to having a core team. There are usually one or two people in every department who can jump in and operate it. That’s really been a commitment on our part. First, find a way to use this tool in your production, and then we’ll help you get training and get better equipment. We started with the 300 and BROADCAST, and once we realized people wanted this, we got TriCaster 850s in here and upgraded our existing equipment.

NM: What’s your thinking on the balance that has to be achieved between the data rate you’re using to stream and the video quality you want to deliver?

JP: This is something we struggle with at every production, trying to figure out what do we need to send out to hit all of the platforms. A lot of times what we will do is hit the content delivery network, and they’ll make the different renditions. OK, we need iPhone and Android, iPad and regular desktop video. So, in that case we send up a higher bitrate so we are starting with something really good, and when it hits all the other ones, we know it’s not going to degrade so much because we started with a high bitrate.

But for a general one-off quick show, we’ll send out 768kbps to get it out, and we know that anywhere we go we’ll be able to get that.

For some of the bigger shows, I’ve been at events where we said, “Let’s max it out if we can because we know it is going to a bunch of different platforms. So let’s get the highest quality out that we can, and let the CDN deal with the versioning.”

Actually sometimes we will do that encoding on our own, or send it back here, it really depends on the show.

NM: Where is the future of second screen content headed?

JJ: Look, digital is only growing. Look at what NBC Olympics did with digital the past two months. Digital is only growing and these emerging technologies are only going to help us grow with the demand. The latest TriCaster basically brings the quality of the content up to a bona fide pseudo-control room level.

Three generations of TriCaster ago was enough for us to produce an after-show following hit shows like The Hills and America’s Best Dance Crew. We did basic awards show BTS (Behind the Scenes) coverage …

The difference now, and the difference of where NewTek has taken the TriCaster, is in the level of production value. So where we had three cameras, now we have eight. We had the ability to add a graphic; now we can add it and place it anywhere on the screen. We had one DDR, now we have two. The future is even greater quality, engaging the viewer in better ways, raising the creative bar with the TriCaster. That’s where we’re headed.