European Championship Studio for SporTV at the Eiffel Tower

SporTV from Brazil is operating a studio near the Eiffel Tower during Euro 2016. This studio and the MCR used for the championships by the channel were planned and created with German participation.

Century 22 Rental, the new company of Ulrich Maslak, has joined forces with other companies to technically fit out a temporary studio for Euro 2016 with associated management and a Master Control Room (MCR) for the sports channel SporTV, which belongs to the Brazilian Globosat Group.

The studio is being used for presentations. During broadcasts from the SporTV Euro-Studio, the fan zone and Eiffel Tower can be seen in the background.

The technical area, which is linked to the glass studio at the Eiffel Tower, controls the studio, as well as acting as Master Control Room (MCR), and thus as the main hub for all channel signals which are exchanged during Euro 2016 between Paris and Rio de Janeiro. With this set-up, during the competition, SporTV produces up to ten hours of programming daily over 34 days.

Century 22 Rental drew up the technical design in close cooperation with SporTV and implemented their requirements.

The glass studio is part of a 13 m high structure with a surface area of 10 x 33 m on the Champ de Mars in Paris, adjacent to the fan zone at the Eiffel Tower. The SporTV studio is one of four studios to occupy this prominent position, with others being used by SVT from Sweden, BBC Sport and ORF. 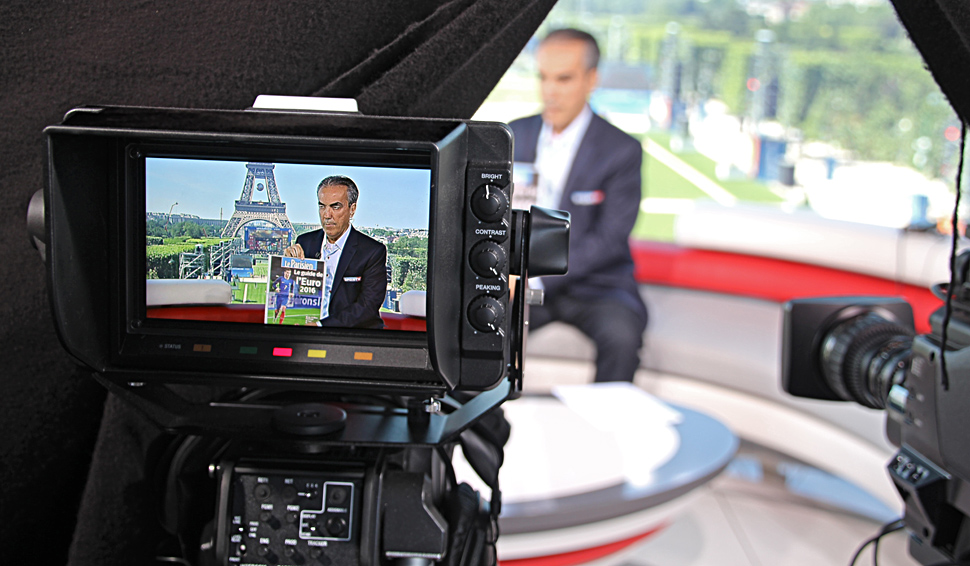 In 53 of these elevated studios, some distance from the containers, on the ground floor, are located the related technology, editorial office rooms and a canteen. On the container roofs, stand-up positions can be booked via the EBU - even ARD and ZDF produce some reports here from the fan zone. With about 25 fibre optic cables, the production site near the fan zone connects the IBC for Euro 2016 and the rest of the world. The overall planning of the TV complex at this location was carried out by sports director Wolfgang Quinkenstein.

Technical production of the Euro Studios and MCRs of SporTV 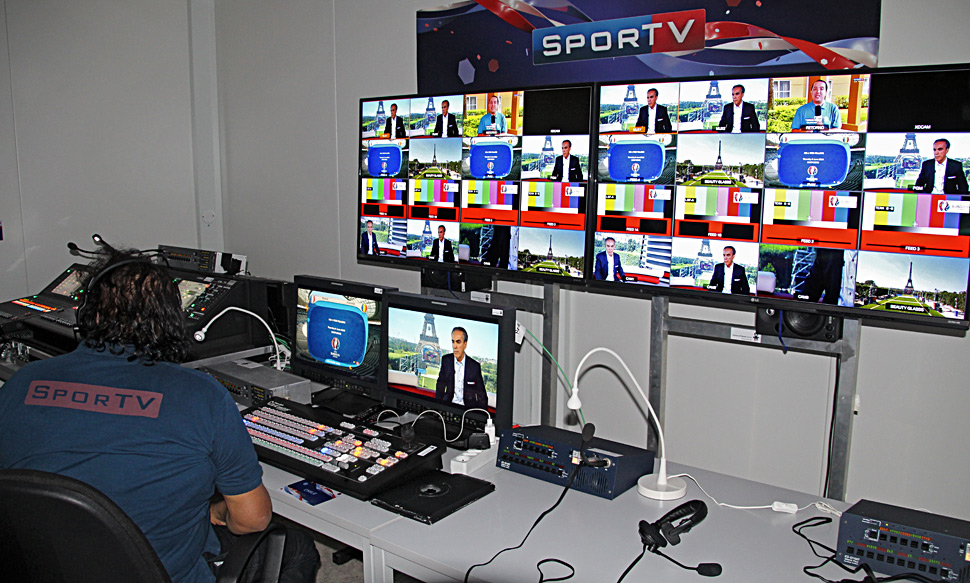 The installation of video and audio technology for SporTV was led by Ulrich Maslak from Century 22 Rental and Christian Haberer from Got Media. BPM, Lang and Logic Media were the suppliers from Germany. The customer wanted to use certain components, which were then combined with other equipment to form a compact solution in several flight cases and now provide the technical infrastructure for live productions of SporTV during the European Football Championship. The Brazilian channel relies on equipment from Newtek, Blackmagic, EVS, Tektronix, Lynx, Yamaha and Sony.

Three Sony cameras on tripod dollies are being used in the studios. These are 2/3-inch HD Sony HSC-100RT studio cameras, each with a 7-inch colour monitor and ENG-Canon lenses. In the studio, the host receives visual feedback from three 24-inch monitors located below the cameras: images from Brazil, previews and switching signals. These monitors are fed via HD-SDI, the signal being directly converted to HDMI on the device with a Lynx converter. The sound is produced in the studio on an audio digital stage box in Dante format.

The heart of the production process is a Newtek Tricaster 850 mixer. In addition to the three cameras, there are four fibreglass cables from the IBC, which are connected to various signals coming from the host broadcaster. The signal distribution is performed via a Blackmagic crossbar with a 20 x 20 matrix. An EVS XT3 server acts as a recorder and player device. To monitor the signals, a Blackmagic 16x Multiviewer is used in the image area, which supplies two UHD Samsung displays for image preview and summary purposes. Two high-quality 20-inch JVC monitors are also used on the mixer. At various positions, monitor bridges are used for image control, for which products from Panasonic and Blackmagic were chosen. The audio monitoring is based on Blackmagic components. 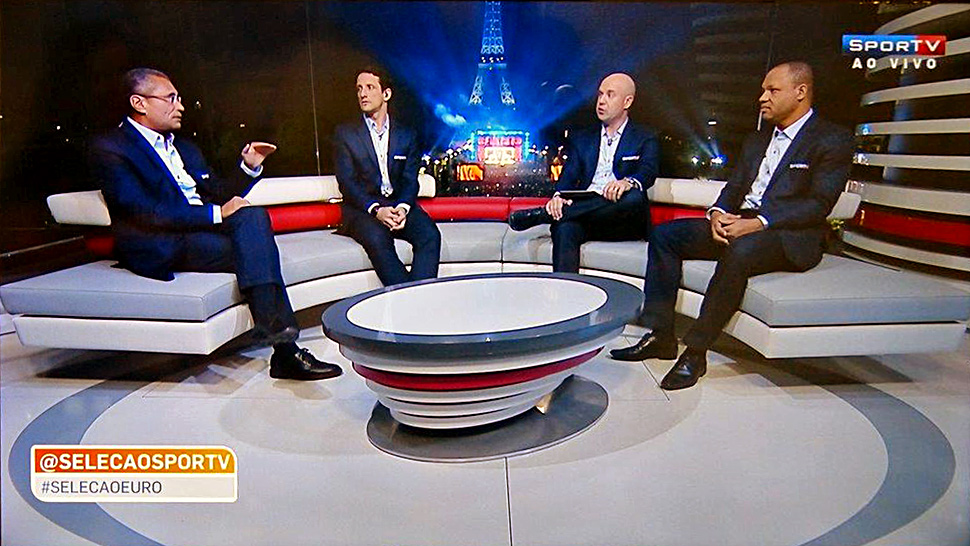 For communication between employees, a Clearcom Intercom is available, with a connection to the IBC in Paris as well as to the central control room of SporTV in Rio de Janeiro. With such an installation, quite a lot of equipment from the field of signalling technology is required: converter, distributor, embedder and the like. This includes a Rednet AES which serves as a Dante converter, while the studio clock is provided by a Rosendahl generator. From the Lynx 5000 series, frame synchronizers, embedder de-embedder, converter and distributor are used. For signal control and technical monitoring, a Tektronix WFM 5200, as well as a Leader LV5333, are available. The complete audio technology is based on a Dante network: key elements are a Yamaha QL-5 mixer and, as a redundancy, a Yamaha QL-1. All audio inputs and outputs are routed into the network with a Rio 32x16 in the studio and a Rio 16x8 stage box in the control room.