TriCaster is a professional multi-camera production system. No matter what the event is, a show for national television or a worldwide live television broadcast, a live stream addressing millions of followers or a live event with a live audience in an arena or a stadium; in any way, going live is stressful and challenging, there is only one shot at going Live. But the Pohoda Festival is another story. No doubt that it was a live experience full of challenges, but most of all, this is a story of passion… but isn't production a matter of passion anyway? 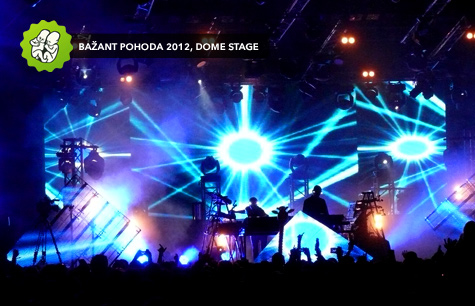 Tomas Sipos is the Directing Manager of Syntex, NewTek reseller in Slovakia since 1994. Tomas has been working with Syntex since 1999.

To start the story, let's say that Tomas is a big fan of Pohoda Festival. Each time he was attending the festival he was checking the cameras, the tripods, the switchers behind the scenes and was wondering what could add value to the festival and to the audience.

One of Syntex customers, a manufacturer of large LED screens widely used in festivals happened to discuss with Tomas of the opportunity that Syntex could provide a solution to complete and develop their offer on Pohoda Festival.

This specific customer knew TriCaster and NewTek's products quite well, that's why he was very keen on trying NewTek broadcasting solutions on the festival. 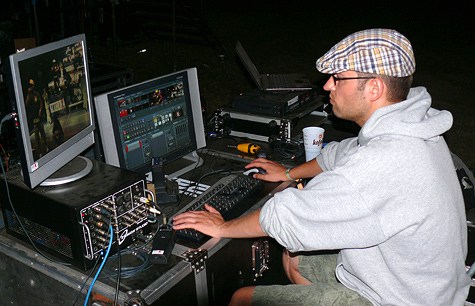 It was agreed, two Video Toasters were used on two of the seven stages and a TriCaster was brought as a backup. Don't get it wrong, we are not talking about history and old products, but about reliability, robustness and consistency.

For the main stage, the Dome stage, where the most popular groups were performing, they needed a switcher as well, a professional one that would not fail them with such a challenging line-up and production. Tomas setup the TriCaster he had in spare. It was used to its full capacities. Within a few minutes, 3 live cameras were plugged to the TriCaster via composite, the graphics and clips were uploaded and they were ready to go live. 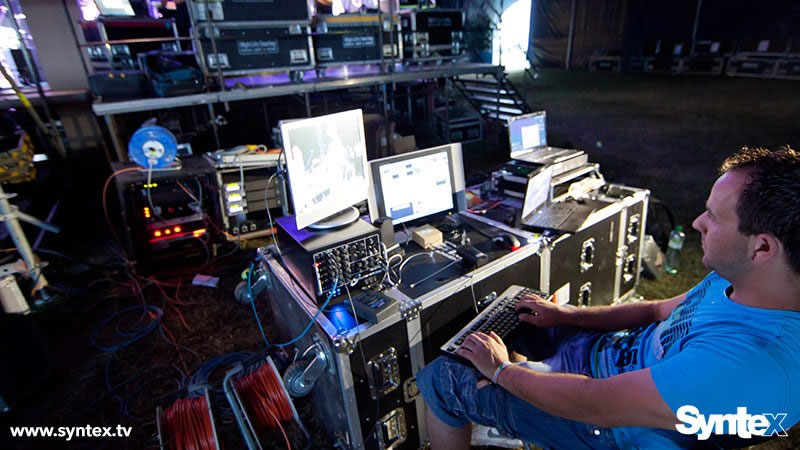 The training of the staff on site did not take long as the operator already knew how to use a video toaster, so after a short introduction of TriCaster, they could operate the system without any hesitation.

They had around 10 people for the operation of the Dome stage but only 4 people (including Tomas) were operating TriCaster. "All operators had previous skills with Video Toaster so the training was done in about 30 minutes just before the beginning of the festival." says Tomas,"Since TriCaster is a straightforward system and has a very clear user interface, all operators had no problems working with TriCaster immediately".

The final output composite PAL signal of the TriCaster was going to a video processor. It was then adjusted to the right size and sent directly to the 12x3m screens located in the background, right behind the band playing on stage. 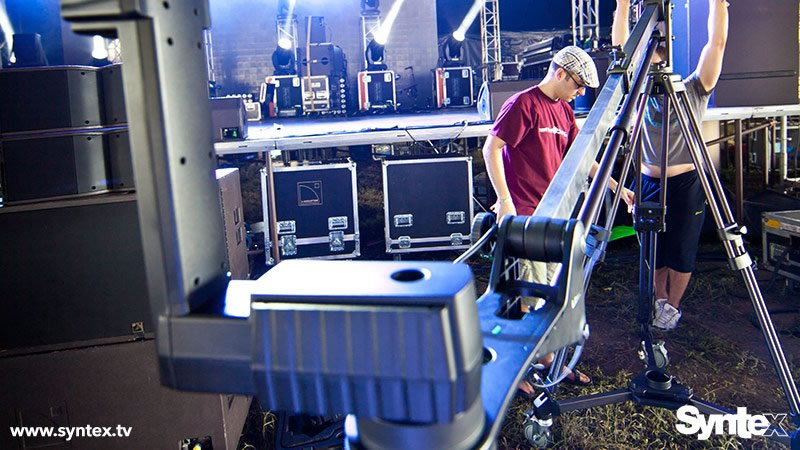 To describe a bit the full set-up, they had a mix of SD/HD cameras and all of them were connected to the TriCaster via composite cable. The main camera, set on a Libec SWIFT JIB50 crane with remote head, was a SONY PMW-EX1R with remote control. The other cameras on stage were SONY DSR-PD150. Another PMW-EX1R was also used for archive footage.

The main video system of the festival was the TriCaster STUDIO . It was receiving the signals from the three cameras of the Dome stage. Two cameras  were placed on a tripod  on each side of the stage and a third camera SONY PMW-EX1R was installed on a brand new arm SWIFT JIB50 steerable motor head REMO30 from Libec -u. Tomas had heard about the new arm the day before the first day of the festival and took this opportunity to try it. In addition, a remote Libec ZC-9EX was attached to the arm as well as a preview monitor AVtec LDV-070A on an adjustable arm Libec AS-7K . The other inputs of the TriCaster were signals such as VJ inputs coming from external laptops.

The final mix of sources during the live performances, as well as the playbacks and clips played during the breaks between the bands, were made with the TriCaster STUDIO. 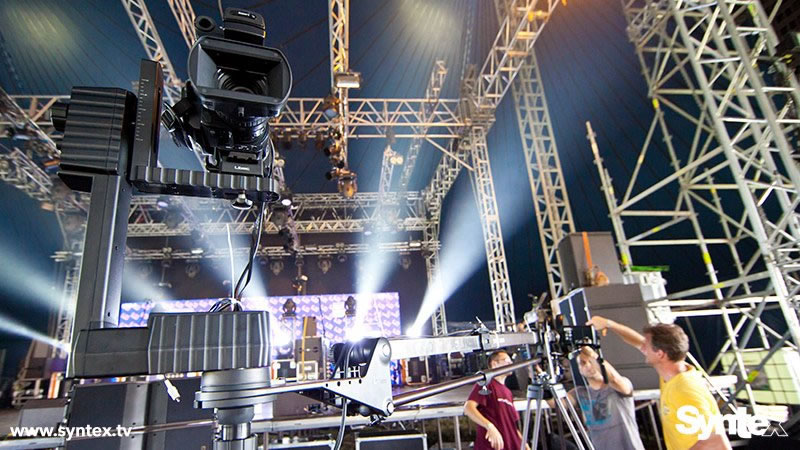 "TriCaster has a massive advantage", says Tomas, "It is the ability to play directly from the integrated dual-channel player, for example clips prepared in advance for each band. No need to have a separate player, which would mean another system to fit in the production environment, more cables and more power. Everything is integrated into one environment with auto run clip, or playlist, in the player."

According to Tomas, another advantage, priceless during fast pace productions such as live concerts and festivals, is the integrated titling capabilities, which can save the live show because it gives the ability to cope with last minute changes. Line-up changes, bands and stage changes, such subsequent modifications need to be handled in a few minutes. 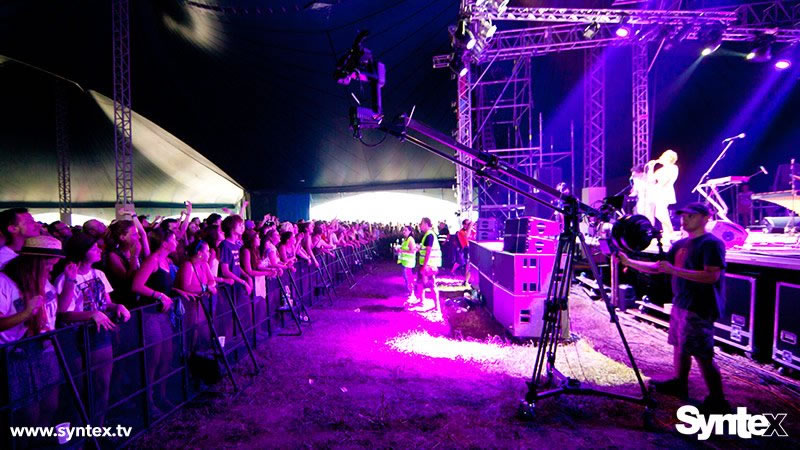 Finally, they used a wireless intercom system COMSTAR from EarTec -u, which has been proven very efficient in noisy environments. Communication between the two cameras and the director was made with the Datavideo SE-800 console to allow wireless transmission, which left the cameramen hands free to capture the festival.

TriCaster is extremely easy to use and  the compact production solution of NewTek is a real plus for festivals' productions,. They had everything they needed in one extremely portable production system, switcher, DDR with playback and titles…

The main difficulties during festivals and concerts productions are the imponderables and the last minutes changes of performances. A few bands were moved from one stage to another, some other bands didn't make it to the festival because they missed their flights or lost their instruments and couldn't perform...

Being flexible is the key. Changes happening five minutes before the show, being able to connect more cameras or sources such as VJs, on the fly and the possibility of changing titles are things that you should be able to do during the live performance, and TriCaster allows that. 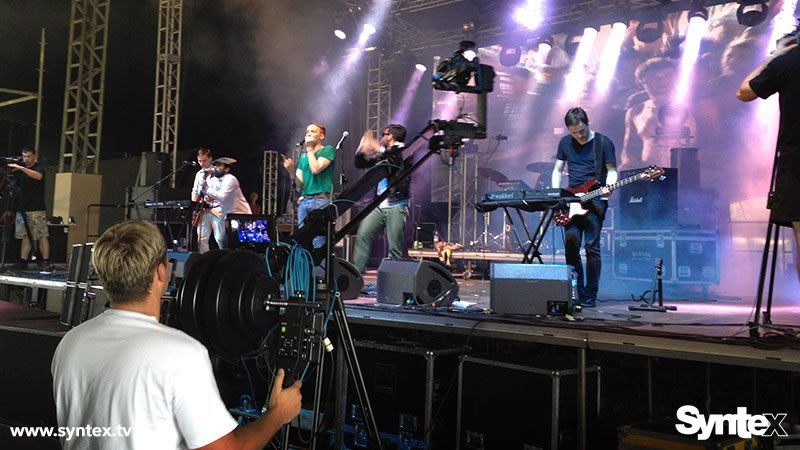 "What do I like in TriCaster? The extreme stability of the system in challenging environments, the multiviewer, the integrated DDRs with playlist features, the animated titles, the 6 inputs capacities…"
"All these features in a small box helped us a lot, especially when setting up the equipment", says Tomas, "Imagine that you would have separate "boxes" for switching, multiviewer, playback, recording and streaming, you would need much more space and cables. And of course more problems would occur when making last minute changes."

TriCaster was turned on the first day, Thursday at 4:00 p.m, just before the first band. It ran for the whole evening and was turned off after the last performance which was usually around 04:00 a.m, everyday during 4 days. 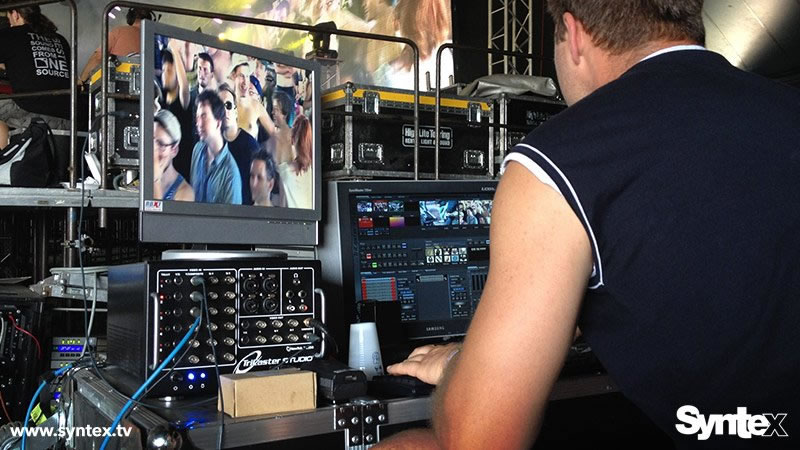 "I am not sure if the last operator even shut down the system! If you take into account that the overall temperature in the production tent was around 40-50 Celsius degrees and that we were in an extremely dusty environment, TriCaster was performing fantastically. Thumbs up!"

The festival was held from July 5th to 7th, this year was the 16th edition and attracted more than 30 000 participants. Each year, and over the years it welcomed more and more Slovakian bands and music projects as well as many foreign bands. Seven stages were installed where many  worldwide known musicians performed, such as Public Enemy, Yann Tiersen, Kasabian, Lou Reed, The Kooks, Elbow, Orbital, Anna Calvi, Emiliana Torrini and Bat for Lashes… 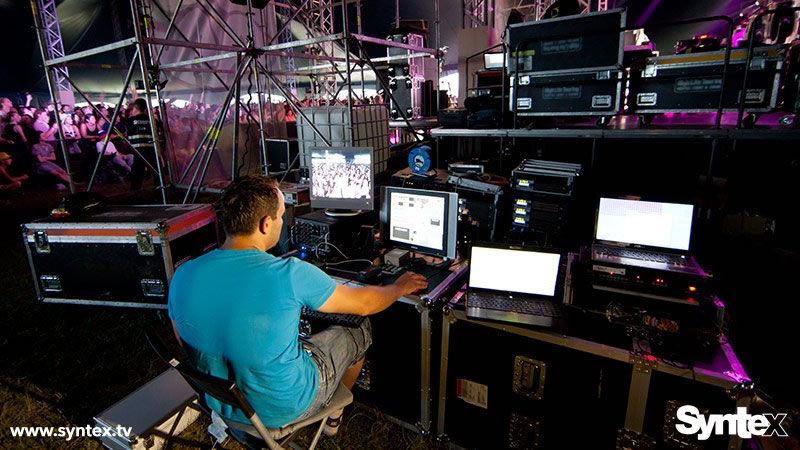 "From our perspective, this year's Pohoda festival went very well, proof is the highest awards 10/10 from virtualfestivals.com that we won. We are looking forward to be on the deck again for Pohoda 2013!"